A coloring book. For your monsters. 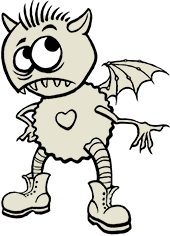 Why yes, I have been talking about monsters kind of a lot.

But only because I obsess over them.

And today I wanted to clear some stuff up. Because a number of people (not you guys) seem to be under the impression that I’m into slaying monsters (I’m not).

Or — and oh god this is so much worse — they think that I advocate “embracing” monsters (uh, I can’t even say “embracing” without air quotes, possibly also air italics).

A wee bit of background.

A stuckness. A block. Internal (or internalized) criticism. Thought patterns. Anything you say to yourself that hurts. Sometimes called “the critic”. Bleargh.

So. Just to be clear on stuff:

Why I don’t think we should be pacifying our monsters.

I’ve never advocated this. In fact, I wrote an entire post called don’t give your monster cookies.

Pacifying is another form of avoidance. It’s basically saying “I’ll do whatever you want, just shut up so I can go on pretending you’re not there.”

What I’m trying to accomplish with talking to monsters is finding out what they need and making sure they know what I need. It’s not passive. It’s active.

And it’s not about treating the monster as a thing that has supreme power over me.

Because it’s actually about experiencing sovereignty, while still giving my fear and my stuck the legitimacy to exist (see Destuckification 101).

Why I don’t think we should be “embracing” our monsters.

But mostly because, in my experience, most of us aren’t ready to be all lovey-dovey shmoo shmoo with with our monsters.

So that language isn’t helpful because it triggers resistance. And when you’re in resistance, everything stays stuckified.

It is true that when you have conversations with the stuck, it invariably turns out that they’re on your side. And sometimes you even end up feeling kind of schnuggly towards them. And that’s great.

If you’re there, awesome. Embrace away. It’s just that it’s not the goal.

And I’m not going to encourage something that will just create more resistance in the people I want to help.

Why I don’t think we should be kicking the crap out of our monsters.

Because our monsters are part of us (we created them), and being violent towards them is practicing violence on ourselves. See, yoga teacher here.

Because your monsters’ supreme monster mission is to protect you from harm and humiliation. And even if they’re doing a really crappy job of it by causing paralyzing fear … trying to destroy them doesn’t actually work.

The more you try to slay them, the louder and more insistent they get.

So instead of training them to get more creatively insidious with the ways they keep us stuck, it’s useful to stop that cycle and get them to change their approach to something that doesn’t suck so much.

What I do know that helps with monsters.

Being genuinely curious about them.

Putting them to work doing something that’s actually useful.

And the most important part of all this?

Having a conscious relationship with your stuff.

Knowing what your monsters are saying and why, so you don’t have to be impressed by them.

Finding creative, intelligent ways to navigate their world, without perpetrating violence towards ourselves.

And I know this stuff not because I wrote a couple dozen posts about it but from working regularly with these techniques on my own monsters.*

* And practicing with thousands of people in my coaching and consulting practice over the past five years. Ooh, remind me to tell you about the Baptist conventioneers we freaked out at the last retreat.

The actual point (or: why do I write so much about monsters?)

What I’ve given — or tried to give — in all of my many posts about monsters is an approach.

A thoughtful, intelligent approach that’s about figuring out what you need to stay safe, as well as what your monsters need (in order for them to know that their mission of keeping you safe has not been compromised).

So that you can really have a conscious, intelligent relationship with your stuff, as well as a real sense of sanctuary when you enter into these difficult internal negotiations.

Because the approach is the important thing, as you already know if you’ve been working with this stuff.

But what I haven’t done is give actual tactics.

And now there will also be tactics.

I’ve tried to model how I talk to monsters. My conversations with walls. And stucknesses. And fog. And blocks.

Just not in any kind of organized here-is-exactly-what-to-try-when way. Until now. With (excuse me while I say squuueeeee) the Monster Manual & Coloring Book. So yeah, I made a thing. And I hope you adore it. Well, I hope your monsters do.

Part 1: We all have stuff. Double especially when it comes to monsters. We tread lightly with other people’s stuff. And we take responsibility for our own stuff.

Part 2: Celebrate with me. I made a thing!

p.s. I’ve written a leetle love letter to your loudest monster on the Monster coloring book page. So let your monster know that you’re not going to read it and then just casually leave the page open …