The Story of Selma 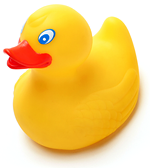 I have a strong streak of davka. Contrarian-ness? Yes, I am a contrarian.

Not that I do everything to be contrary davka, but I do many things davka. And not writing a FAQ (though I did write an amusing — but really only to me — post on how to write one) is one of them.

Insisting on using the word davka because it’s better than “deliberately contrary” is another.

All that to explain why I’ve never written a post about “why a duck” or “how Selma and I met” or “what is wrong with me and why would I think that having a duck as a business partner is funny”.*

*For the record, I don’t think it’s funny at all. Bizarre, yes. Tragic, maybe. Funny? Not even a little.

Yes, these are essentially the three most Frequently Asked Questions that show up in the inbox that I never see. (You know what’s crazy? The post I just linked to also contains a FAQ. Fascinating. Apparently I write them everywhere and then pretend I don’t. We’ll talk about that later.)

And I don’t answer them. So I think it might be time. Yeah. It’s time.

Well. I usually just say she’s my business partner. Which is true. It’s just that it’s the short answer.

Sometimes I tell people that she’s my silent partner.

Because she doesn’t say much. Again, funny pretty much only to me and Selma.

But you probably want more than that. I can tell.

And the truth is, I don’t really want to write about Selma. Selma is private. And not just in the sense that she’s my personal friend so I don’t want to divulge too much. No, she’s just a very private duck.

So here’s what I can tell you.

How my duck and I first came to meet.

I was living in a mostly-abandoned building in East Berlin and teaching yoga. In Hebrew. My wonderful friend David was visiting from London. He brought ducks. It’s a long story.

The point is that Selma and I fell in love. Her brother Julius was sweet and kooky and adventurous and prone to getting into trouble. And Selma was just Selma. Always smiling, very calm.

She just has this lovely way about her, you know?

Julius ended up going back to London with David. And Selma stayed with me. There was another sibling but he got eaten by a baby and it’s a pretty tragic story and we will not mention it further here.

I’ve already referenced my bizarre living situation when I told the story of how the Fluent Self got its name, but I should add that there were always interesting people coming and going.

I’m not exactly a people person, so I would often take Selma out for long walks in the sun. Or in the rain.

One day I came back and one of our many international guests (a stop-animation artist from Barcelona) was in the kitchen. She grinned at me. She said, “You like to walk your duck.”

And then she told me a story.

After her dog died, she been pretty miserable. Obviously, she missed him terribly. But she also really missed the experience of having a reason to go off by herself for a while.

She’d grab her coat, pick up the leash and announce casually, “I’m going to walk the dog.”

Eventually people got used to it.

We understood each other.

In which Selma and I begin to work together.

I was already taking her everywhere, so of course I brought her to class.

At this point I was teaching Dance of Shiva (my wacky yoga brain training work) in both German and English all over Berlin. Selma turned out to be a huge help in these classes.

For one thing, people kept forgetting to keep their palms flat (palms of the hands, not fronds or anything — it’s wacky, yes, but it’s not that wacky). So I’d use Selma to demonstrate the hand positions.

But even better, having a duck with me kind of took the piss out of what is otherwise a frustrating, challenging, mind-bending practice. It gave people — Germans no less — the chance to loosen up and have a little fun with it.

Once Selma started teaching breathing exercises, it was all over.

One day I didn’t bring her to class, and people didn’t like that. So I brought her on board as co-teacher and everyone was happy. Especially me.

In which I am an idiot and try to hide my duck from the world.

When I first started biggifying, I mistakenly thought that people would judge me for my duck. For having a duck.

Well, they do. But it’s just not a big deal. Here’s what happened though.

People told me over and over again that I had to appear as professional as possible, if I wanted to get clients and have everyone take me and my work seriously. Everyone I talked to advised against talking about Selma.

And for a long time I listened to them.

I was making the classic mistake of wanting to be an expert so badly that I wouldn’t let myself be human or seem vulnerable. I erred on the side of safe and boring, thinking that was the sacrifice I needed to make in order to be successful.

But eventually I realized that I couldn’t keep it up. My duck was my partner, my companion, my muse. I couldn’t not talk about her. I needed Selma to be a part of things.

So I psyched myself up. I started mentioning her in the noozletters. Eventually I changed my photo to one of the two of us. We’d both sign our names to stuff I’d write while she was sitting next to me, peering over my shoulder.

And the world did not collapse. No one fired me. I did not end up living in a cardboard box. I could not have been more astonished.

In which I become famous and then everyone thinks I was all strategic about it.

Selma became a superstar way faster than I did.

Anyone who doesn’t get it? Anyone who thinks it’s stupid that I have a duck as a business partner? Probably not somebody I want to work with.

It’s the people who write to me saying, “Ohmygod you have a duck! This is so perfect!”

Those are the ones.

I never intended for Selma to become what Michael Port refers to as a “red velvet rope”, but that’s essentially what happened. More than that, she taught me how that whole concept works so that I can recognize other people’s red velvet ropes.

A lot of people seem to think that I’m a clever marketer and that Selma is some kind of strategic ploy. Which is hysterical, because when Selma and I met I still couldn’t even hear the word “marketing” without throwing up.

Not to mention the fact that everyone I talked to warned me that she’d lose me business.

Now she’s a total celebrity. And she’s made me one too, in her weird little way. She got us on German television. She got us onto the front page of the Style section in the New York Freaking Times. She got called a whore by Itty Biz. You know how it is.

But I can handle it…

So Selma’s more popular than I am. And I’ve mostly made my peace with that.

She gets fan mail. She gets presents. People will send things addressed to Selma the Duck, c/o Hoppy House.

And — even more bizarre — sometimes these packages are addressed to Selma Brooks. I mean, it’s not like I adopted her. We don’t share a last name. Oh well. That’s just part of living with a celebrity, right?

The truth is though, I love her.

I love having her around. I love her psychotic, goofy smile and I love the way she looks at me. If she wanted to leave the business and go off and sell shoes or something, I would cry.

Now you’ve gotten me all sentimental and mushy and Selma will never let me live it down. Actually, she will. Because she’s like that. But no one else will.

Man, I hope this was as interesting as what you were hoping for. Because I probably won’t get around to answering another Frequently Asked Question for a while. Let me distract you with my duck!