Today I am a harbor seal.

Yesterday I spent the better part of the day observing harbor seals at Monterey Bay.

And then practicing being one.

It’s hard to see something as ridiculously awesome as a harbor seal without going all annoyingly National Geographic and just anthropomorphizing the hell out of it.

I observed stuff about harbor seals. Of course all of this is probably wrong, but oh well.

We were close enough to see them blink.

Close enough to hear them sneeze.

My gentleman friend walks me to the spa.

He says, “Sweetie, go be a harbor seal. Go do nothing and go be comfortable and go give yourself the right to care about nothing but being comfortable.”

Here’s what I see when I watch harbor seals.

They’re hanging out mostly in groups, but without interacting in any visible way.*

* Actually, we kept seeing them in bunches of six, which made for inappropriate Seventh Seal jokes that totally would not stop being funny.

If you are a seal, your job apparently boils down to this:

Find a comfy rock to curl up on, roll around on the rock until you find the most comfortable position. And then stay there. For hours.

Belly up. Belly down. Wacky seal yoga pose. But once you find your rock, you’ve found your rock and that is it.

If someone else gets the rock before you, baby that’s how it is. No one fights over the rocks. You just wait and then the tide goes out and eventually there is a rock for you to nap on too.

You ignore everything, including your fellow seals. You especially ignore birds. So not interesting.

Even the pelicans who are totally eyeing your rock. Or who have claimed a rock that could easily be yours if you made a move.

I meet a woman named Virginia at the spa.

She goes there to get a facial whenever she can.

She says the thing about chemo is that everything is so unpleasant that the good things become really good.

Or a facial. A facial makes things more bearable. A really good facial is a reminder that things are good.

I like Virginia. She has a nice way about her and a this is really me smiling at you kind of smile.

Then I notice part of me feeling uncomfortable.

My monsters are making it hard to have a conversation because they think that anything I think or say will be completely insipid.

I stop. I do the harbor seal thing.

Take care of yourself first, so that you can be present for her. You can’t be present with her pain or her discomfort if you’re not aware of your own coming up.

Giving yourself permission to be a harbor seal is not as easy as you might think.

The first thing I think when I see them lolling about on the rocks with their casual expressions and their happy bulging bellies is this:

“Seriously, don’t they have predators? That can’t be safe. Can it?”

Because my fuzzy fear monster says that if I relax I’ll get hurt. Again.

The second thing I think, watching the harbor seals is GET A JOB!

And that’s another fuzzy fear monster who thinks that if I take care of myself and get enough rest and care, other people will think I’m lazy and unmotivated.

I ask: what happens to this judgment and fear when I am a harbor seal?

And the answer is: I don’t care.

When I am a harbor seal, I don’t care about fear or judgment.

Instead I care about nap time. And comfortable rocks. And being all content and schleepy in the sun.

My monster might think I’m going to get lost in the comfortable and never find my way back, but that’s what the mediators are for.

I have a new mediator. A harbor seal who blinks at my monster and says, Dude.

The woman giving me the tour of the spa wants to know if I am here for some sort of special occasion, and I don’t know what to say in response.

My fuzzy fear monster says I suck at the small talks.

I could say something frivolous like why yes it’s the anniversary of last Monday.

Or I could say something about my intention like this is just how I take care of my body.

But that’s not true. Not yet. As my fuzzy fear monster keeps pointing out.

Instead I become a harbor seal.

And then I don’t say anything else, and my fuzzy fear monsters wait to see if the world will explode.

She says, I’m Stella if you need anything.

What would a harbor seal do?

During my massage I pretend I am a harbor seal and it helps me get through the parts I don’t like.

After my massage I head to the water.

There is an empty jacuzzi on the roof, looking out over the bay.

I am a harbor seal so I just sit there and do nothing while the sailboats come in and the sky goes pink and there’s nothing but water everywhere.

This is a safe space to work on our stuff (and the fact that we have it), and interact with monsters.

So everyone is allowed to have their stuff, and we respect each other’s right to have it. Because this is a self-proclaimed harbor seal sanctuary.

p.s. If you know crappy, horrible things about harbor seals, tell me some other time. Because right now I’m taking a nap on a rock. 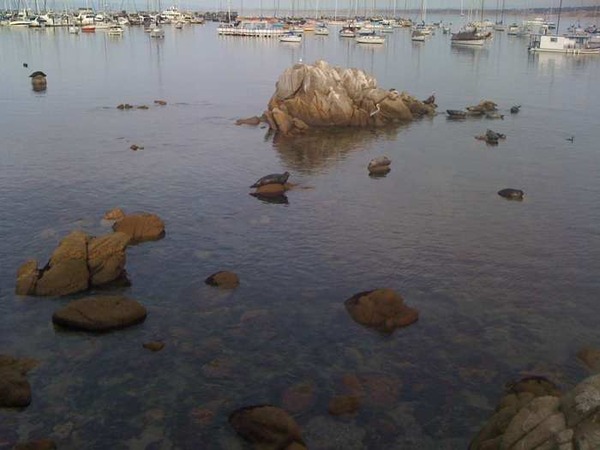