Because it’s Friday AGAIN. And because traditions are important. In which I cover the good stuff and the hard stuff in my week, trying for the non-preachy, non-annoying side of self-reflection.

And you get to join in if you feel like it.

So tired of wearing ear plugs.

I am going out of my mind.

So now I leave for the Playground at seven in the morning. But there’s construction there so basically it all sucks for Highly Sensitive Person Me.

Also, ear plugs don’t really work. They sort of work. But I can still hear that itsy bitsy spider navigating the stupid spout, over the shrieking and the barking and the leaf blower.

Oh, and it’s too hot to close the windows.

While I’m complaining. Let’s talk about the heat.

I moved to Portland because I look good in layers. Add a little fog and a light drizzle and I’m in my element.

At home among the translucent freckled people who inhabit this delightfully grey part of the world.

Fine, so it’s sunny in the spring. And the summer. But it’s OCTOBER already.

I want fall and I want it now and I do not want to have to keep un-retiring my flip-flops and the fan.

First person who says “don’t complain” or “oh but you’ll miss the sun in December” gets glared at.

It is — knock on tree — going to survive but we have been very worried. Also, after a two week series of unexpected expenses that would not end, another $800 for tree care is a little unsettling.

But honestly? I adore that tree so much that it hurts.

First I read two posts that sounded like me to the point of parody.

Usually I don’t pay much attention to all the “imitation as flattery” stuff that swirls around the internet, because that’s kind of part of this weird thing that is online celebrity.

But actually it’s pretty disconcerting to realize that you are parody-able.

Then I read something else lifted verbatim from a class I taught. And I have no idea what to do with that.

Discomfort. Doubt. Not knowing what to say or do.

And then feeling self-conscious, which makes it really hard to write. So I’ve been avoiding reading even more than usual.

Day off! Day off!

We went to Hood River and I got to do lots of nothing. Like rolling down a hill and cloud-watching.

And buying presents for the Playground at a shop whose tagline is “good books and bad art”. Nice.

Already planning the next one.

The most fabulous people coming to the Rally.

Oh, as if I weren’t already excited enough.

Some seriously wonderful people on their way to Rally (Rally!) and I can’t wait.

I taught a class where we went through a process of symbolically closing doors.

And I have been closing so many doors in the past week, both in my business and in my home.

Set up three new forum boards at the Kitchen Table.

The epiphanies. Are being had.

I had so many outrageous ideas this week that my arms hurt from scribbling.

Huh. Turns out this business-on-Facebook thing is kind of fun. .

The fabulous Secret Bar is now officially the Frolicsome Bar (FB) — thanks Liz!

And while I am still feeling slow and confused … it’s a pretty neat thing.

More to come. And I shall put up Schmoppet videos there too. Oh yes.

The page, if you wish to play: http://www.facebook.com/TheFluentSelf

Eating in the sukkah.

So I have been writing all week about playing. And this has been making me play more. Tearing it up!

And having all sorts of shivanautical insights about what playing means and why it’s important.

And then Kel sent me this link about a company in Pittsburgh that has a pirate ship and whose motto is this:

“The best work comes out of the spirit of play.” — George Davison

This was a really nice thing to receive.

Reprinted from the sweet-letters file, with permission:

“I just really want to tell you that reading your blog feels like having a huge weight lifted off of you that had been there so long you forgot it was there, while simultaneously having someone gently wrap a soft fuzzy blanket around your shoulders at the exact moment you realize you are chilly. Lean into it and sigh, and face the day from a better place.

“Hugs to you and Selma. And thank you. You know, for being you and for writing this blog.”

And … playing live at the meme beach house it’s the Fake Band of the Week!

My brother and I have this thing where we come up with ridiculous band names and then say in this really pretentious, knowing tone, “Oh, well, you know, it’s just one guy.”

This week’s band is known for their unlikely sound. And the way something always happens right after the opening act that has nothing to do with the show.

Gotta love them. But of course it’s just one guy. 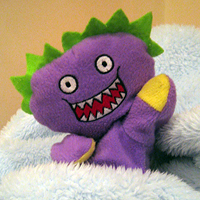 Some of the fun presents that arrived this week.

He is a puppet. An extremely opinionated, crazed extrovert puppet with a limited vocabulary. Who plays air guitar. I ADORE him.

Then Char sent an unbelievably soft blanket that the Schmoppet has taken for himself. It’s a muppet pelt or something. It is divine.

And there was something else (not a cucumber) that wowed me but now I can’t remember what it was. Next time.

And yes yes yes, of course you can join in my Friday ritual right here in the comments bit if you feel like it.

Yeah? Anything hard and/or good happen in your week?

And, as always, have a glorrrrrrrrrrrrious day and a restful weekend-ing.

And a happy week to come. Shabbat shalom