Because it’s Friday AGAIN. And because traditions are important. In which I cover the good stuff and the hard stuff in my week, trying for the non-preachy, non-annoying side of self-reflection.

And you get to join in if you feel like it.

Has it been a week? Seriously?

We’ve been making pretty solid recovery. Or at least giant steps in that direction.

But you know what? I am so over not being able to do things.

Everything takes a thousand times longer. I get impatient. I get frustrated. I am not fun to be around.

Or, I would, but it comes in a container that involves twisting the cap and I can’t twist caps so I can only take it when someone opens it for me.

Or no, I’m already on six dozen other treatments.

And I have two acupuncturists, a massage therapist, and three healers working on me, in addition to all the deep emotional healing work I’m doing on my own.

I know everyone really wants to help. Which is generous and kind and beautiful. And makes it even worse, because then I feel bad for not feeling grateful. But I really, really wish that people would say, “Wow. You have no hands. That must be really challenging for you.”

And then leave it at that.

Writing is my entire day.

Talking a post out with Stu (my voice-to-text software) or dictating it to my brother or my gentleman friend takes at least twice as long as typing one.

My personal stuff about time and needing more of it, or needing to use it more efficiently … buttons being pushed here left and right.

Haven’t solved this one yet, but something’s got to give.

I had to go to the mall.

And there was no way out of it.

Nothing like forty-five minutes of soul-sucking empty-minded trapped-in-a-windowless-hell to trigger my most claustrophobic misanthropic semi-deranged mental ramblings.

One of my wonderful At The Kitchen Table With Havi & Selma members was in Portland for a thing and — very enterprisingly — set up a dinner with some of the folks who are local. 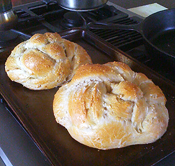 And oh wow! Somehow I hadn’t realized that we had a pretty decent chunk of Table people right here.

Or that I’d never actually met any of them except for one.

So Selma and I went to dinner with all these people and each one was as lovely in person as online.

And there was macaroni and cheese, which makes me happy. And I baked. There’s even a picture.

My arms. They are improving.

Despite all of my complaining, the moaning-in-agony part of my hurting-healing arms is actually over.

Because I made a salad this week! My arms worked well enough to make a salad!

Well, not a whole one. I got almost to the end and then I had to stop. But chopping happened. And slicing.

Considering that two weeks ago I could barely brush my teeth without yelping in pain, huge huge huge change for the better.

Hiro. I love that woman.

One of the people who has been doing magic on my arms is Hiro Boga, who is also one of my Group Leaders at the Kitchen Table.

And it’s been phenomenal. I am convinced that I am going to come out of this pain with so many new skills, insights, understandings and wacky magic powers that I won’t even know what to do with them.

But I’m ready to find out.

And Hiro is doing an incredible job of facilitating this whole healing thing. I cannot recommend her work highly enough.

My duck and I taught a class this week on the basic self-work principles that I think everyone should know but actually they don’t. And it was hot.

Then I interviewed Naomi about money and strategizing and coming up with a work-able vision for your business. And that was hot.

Then Molly Gordon interviewed me (and Selma, who didn’t say anything) about dissolving procrastination and general destuckification. And that was hot too. Molly is so great!

So I kind of feel as though I spent the whole week on the phone. Which normally is not my thing, but it was just so much fun.

It still amazes me how much useful information is out there and how many smart people I know.

Came to visit. Actually, he sent an email saying “Arriving by Iron Horse” and we walked to the train station to pick him up and find out what his plans were.

And since he never has a plan — which I adore — we had adventures.

I should say “our” favorite uncle, since my brother feels exactly the same way, and my gentleman friend loves him too. So a dose of Svevo is good for everyone.

We went on long walks. And did yoga together. And talked about the value of not doing (he is my role model in every way).

It’s so great to have someone in the family (aside from my brother) who I can sit with and think, “Yes, it actually does make sense that we’re related.”

I love him so much! Especially for modeling what and who I want to be when I grow up.

And … STUISMS of the week.

Stu is my paranoid McCarthy-ist voice-to-text software who takes pleasure in misunderstanding me.

Some of the gems from this week:

There are more, of course, but I can’t find them. Though my gentleman friend — in a Stu-ish moment — did call me an unpredictable wench. A huge improvement on Boldy McSchmoldy which was what he called me last week.

And yes yes yes, of course you can join in my Friday ritual right here in the comments bit if you feel like it.

Yeah? Anything hard and/or good happen in your week?

And, as always, have a glorrrrrrrrrrrrious weekend. And a happy week to come.