One of the things we do at Rally (Rally!) is make up a ridiculous and unlikely cover story for why we’re here. 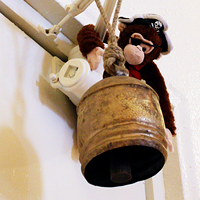 My story for this week of the Great Ducking Out turned out to be that… get this, I have an obsession with monkeys!

Specifically monkeys who wear clothing. And that’s why I’m at the Playground. Because there are several of those here.

Not here to work on a big project, no no no no no! Nothing happening here, monsters!

What do I know about monkeys wearing clothing? 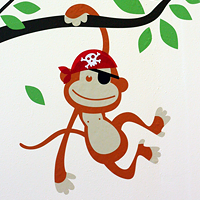 More than you’d think, as it turns out.

We did some stone skippings after the morning shivanauttery, and one of the stone-questions was this:

What do I already know about why I’m here?

And since why I’m here is to be obsessed with clothed monkeys, the question became …

What do I already know about monkeys who wear clothes?

I probably know even more things about monkeys who wear clothes.

But that’s where I stopped in order to skip another stone.

Here were the other questions:

What will I need in order to do this?

What needs to change in my kingdom for this to happen?

The monkeys told me what to do, and now we’re cool.

Other sneaky problems that the monkeys solve.

This way we don’t have to talk about our mysterious projects (unless we want to, of course!).

And we can speak in secret agent talk.

(“How’s my clothed-monkey obsession going? I’m learning all sorts of fascinating things! What about you? How’s that rug-researching?”).

Plus when the cover story gets to double as a super sneaky proxy, you can work on that instead of your projects.

And then the monsters are extra quiet, because they aren’t invested in telling me how I’m going to FAIL DISASTROUSLY at caring about clothed monkeys.

One more thing I can tell you about clothed monkeys.

They can dangle from anything.

And this is fun for them.

They especially like it when you say YAY when you see them dangling from something particularly unlikely.

Isn’t that a reassuring thing to know? It was for me.

Play with me! And the giant commenting blanket fort.

So, obviously, this is not really about monkeys.

It’s about my project. It’s my subjective experience of these particular monkeys. Who aren’t real. One is a stuffed toy and the other is a picture on a wall.

If your experience of monkeys happens to be different (“Monkeys should never wear clothing! I feel strongly about this!”), of course you are allowed to have your own monkey-experience. That should be a given.

However, I’m going to ask that we play along with my version here today, in support of my mission and my secret project.

If you would like to make up your own cover story for what you’re doing today (double especially if you’re going to be doing something for American Thanksgiving!), go for it.

Then you can look for clues about it while making (or avoiding) the small-talks.

Let’s play! As always, we make room for everyone to do their own thing, and we don’t give advice. Unless people ask.

Lots of love. The monkeys and I are wishing you an extra-strong force field today.