I write a Very Personal Ad each week to practice wanting, and get clarity about my desires. The point isn’t getting my wish (though cool things have emerged from wishing), the point is learning about my relationship with what I want, and accessing the qualities. Wanting can be hard, it is easy to feel conflicted about it, and the reasons for that make this a surprisingly subversive practice…

So many things I want to say right now!

Today I complained about a strawberry jam wrapper that had found its way onto the path by my back door. Like a ketchup packet? But for jam? I had never seen anything like this before, and I do not like the idea of people littering in my garden path, or even being in my garden path for that matter.

Someone suggested that maybe it was a crow, and I said that I hope so. I hope it is a crow. And I hope that it is his jam.

And then I giggled for at least an hour.

Today the theme is Releasing Wishes, and that is a double meaning too. It is Wishes about Releasing, and it is the act of releasing the wishes, like balloons.

Remember when I told you about yoga with Sigal? I got to Sigal through Sivan, my first real yoga teacher and a really good friend. Most of the good things in my life have come from Sivan dragging me somewhere over my protestations.

I remember one particular class that Sivan led, this is back when I was still pretty sure I was against all this hippie nonsense, and I only put up with the guided visualizations she’d do after class because she was my friend.

She had us think about a wish and hold it in our hearts and glow love for the wish. And then she had us put the wish inside of a red balloon and let it go.

I don’t remember what my wish was, but I remember this:

I DID NOT WANT TO LET MY WISH GO.

I think actually this is the first time I really understood the idea of attachment. I felt it. I wanted to hold onto the balloon string with all my might. Don’t leave me, wish. Stay with me, wish. Don’t go.

Releasing didn’t feel like freedom, or permission, or allowing something to emerge.

I wasn’t able to understand that surrender can be a sweet softening, that letting something go can be an exquisitely tender act of love, and there were all kinds of good reasons that I couldn’t feel into this distinction yet.

There are endless wishes, endless beautiful currents for wishes to sail.

And the more I release them, the more wishes I can send off into the world to have adventures. This weekly ritual, these three hundred and eight weeks of releasing wishes into the currents, this is because of what I experienced with Sivan.

And then this week suddenly it was June (hello, June), and a new page in the Fluent Self calendar, and guess what. It is the Month of RELEASE MORE.

It’s time to release more. So here I am.

What am I releasing? What are my Releasing Wishes?

Taking it to the water, the bath, the ocean, the dance floor.

What else do I know about this?

This is the right time.

What do I want to experience in this new releasing?

The superpower of Beautifully Anchored and Ready For This Moment.

Anything else about this?

This is related to my Year of Easing & Releasing. I seeded this a long time ago.

And it is related to my Shmita year, which literally is a releasing.

What clues do I have right now?

I have to pee. That’s a releasing too. Let’s do that.

I am on the couch and it’s very late and I don’t want to go to bed. I am afraid to release the day.

Acknowledgment and legitimacy for all the parts of me who don’t want to get off the couch. I get it. It makes sense.

Sweetness and presence. Let’s take our chamomile tea and head upstairs and breathe in bed. Inhale EASE and exhale RELEASE.

Me: Hey, slightly-wiser me, what do you have for me?

She: When you made (non-dairy, no-sugar) banana ice cream today, you released the bananas and the cocoa powder and the vanilla and the poppy seeds. You released them from their previous form so that they could take on this new form: ice cream that was so delicious you were overwhelmed by pleasure and lusciousness.
Me: So you’re saying that releasing can be a kind of alchemy?
She: What if everything in your life is an ingredient which can change form when you let it go?

Today I thought that I had three options to deal with [Situation], and I didn’t like any of them. Then I was talking to my friend Danielle, and learned that she has this exact same [Situation], and that she made a choice which had not even occurred to me.

The superpower of I am stronger than I think. 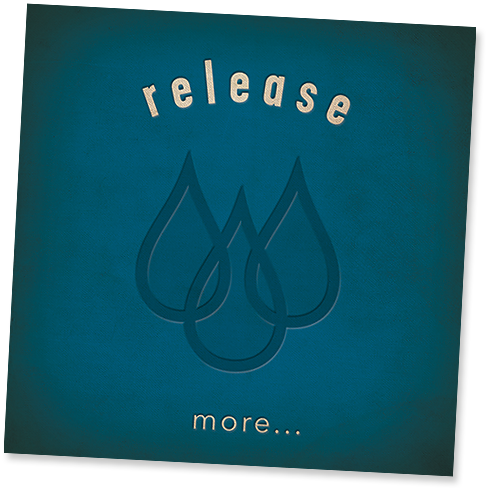 The quality for May was REVERBERATE, and it comes with I take care of myself first. Now we are in June: RELEASE MORE, with the quality of I am stronger than I think.

This is exactly what I need with this week of doctor appointments. And it is the exact right time to be releasing. I can do this. I can let things go. I am stronger than I think.

Things I find helpful for intentions and wishes…

Seeds planted without explanation, a mix of secret agent code and silent retreat. Things to play with someday.

Everything is easier than I thought, and look, miracles everywhere. Ha, this doesn’t require my input! My business is thriving happily without me. I think like a dancer. It’s so perfect it turned out like this. Past me is a GENIUS. I have what I need, and appreciate it. I am fearless and confident. I state my preferences clearly, calmly and easily, no big deal. I am ready to come into my superpowers and receive.

So. Last week aka State of Emergence…

This wish helped me gather the courage and focus to set up a flight to Portland for a week of visiting doctors, wise healing people, and anyone who could help me solve some of the current body-related mysteries. And I was able to get a last minute flight from San Francisco and a flight back to Salt Lake City when I’m done, all for 24,000 miles and twelve American dollars, both of which I had.

Emergence was definitely the theme of the week in all kinds of ways, and as always I feel grateful that past-me was so good at planting seeds, even the ones we couldn’t see at the time.

I believe the Playground mugs are all sold but you can still acquire a pack of stone skipping cards just send a note and we’ll set it up. Ask Richard for cost/shipping.

This is an open invitation to deposit wishes, gwishes, personal ads, superpowers, qualities, whatever you’d like, there’s no right way! Updates on past experiments are welcome too, as is sharing anything sparked for you.

Comment culture: This is safe space for creative exploration. We are on vacation from care-taking and advice-giving. We are here to play and throw things in the pot! With amnesty. Leave a wish any time you want.

Here’s how we meet each other’s wishes: Oh, wow. What beautiful wishes.